Last of an Era for Colombian Bike Racing


With its red, green and blue front, Bicicletas Duarte looks like just one more in a strip of store/repair shops on Calle 68, one of Bogotá's several 'bicycle rows.' Like the neighboring stores', Duarte's showroom displays imported, Asian-made bicycles.

So, hard to believe that in the store's rear workshop you can find a legend of Colombian cycling.

At 77, Jose Duarte walks with difficulty. His lower back aches from decades of leaning over bike frames. His voice is soft. Some of his memories of his decades in Colombian cycling are foggy. But he talks with quiet pride of his many accomplishments, both on the race course and in the workshop.

Born in the town of La Mesa outside of Bogota, as a teen Duarte bicycled to his electrician job. But at age 17 he discovered that his real vocationlay not in the plugs and wires he worked with, but the pedals and wheels he used to get there.

Duarte became a bicycle racer. During his 1956 to 1960 competition years, he rode with and befriended cycling legends such as Italian Fausto Coppi. Duarte competed in several Vueltas a Colombia and in 1959 won Colombia's national road racing championship. But his relationship with Colombia's cycling classics had just begun.

In 1965, Duarte switched from riding bikes to building them, opening his first workshop.

The afternoon I dropped into Bicicletas Duarte, Duarte had just placed the latest classic lugged racing frame he was building into an acid bath. It may be one of the last of some 6,000 frames molded by his hands.

Strikingly, even more than his own accomplishments on two wheels, Duarte seems proudest of what others have accomplished on Duarte-made frames. In the 1978 Vuelta a Colombia, 35 of the the 90 racers rode Duarte frames. Duarte bicycles have won 6 Vueltas a Colombia, as well as the vueltas of Chile, Mexico, Costa Rica, Panama, Guatemala and Venezuela - and undoubtedly others as well. But the greatest achievement is memorialized on his shop wall in the form of the dark blue frame which won France's 1985 Tour del Avenir. The facing wall exhibits snapshots of Duarte with cycling legends including Bernard Hinault and Eddy Mercx, who visited his shop.

But not all of Duarte's famous clients were athletes: He also built bikes for politicians, including charismatic presidential candidate Luis Carlos Galan, assassinated in 1989 by cocaine kingpin Pablo Escobar. Duarte and Galan also trained together.

Galan "was not such a good cyclist," Duarte recalls, "but he was a good politician."

Duarte then built bikes for and trained with Galan's succesor, Cesar Gaviria, who went on to win the presidency. Duarte recalls how presidential assistants would call him at 5 a.m. to announce a top-secret training ride. He would board a presidential helicopter and be transported to some country road, where he and Gaviria would pedal amidst a phalanx of armed guards.

Duarte says that at the time Escobar's business was little known.


"He was my friend," Duarte admits. "But that was before he became a big capo. He was just starting out."

Escobar financed a bicycle racing team and a bicycle factory named Ossito, as well as football teams and other sports. His brother Roberto was a talented bike racer until he got involved in Pablo's business.

"He exported those frames," Duarte says of Escobar. "Nobody knew what they put inside."

When they traveled overseas to race, Escobar's cyclists doubled as cocaine smugglers. In the end, some were killed, others did prison time.

Financed partly by drug money, the 1980s and '90s became an outstanding period for Colombian cycling. Today, with apparently much cleaner finances, Colombian cyclists are once again accomplishing great things in European road races. Leading the charge is the extraordinary Nairo Quintana, who finished second in this year's Tour de France, where he also won the best climber and best young rider jerseys. Quintana, like Duarte, came from a poor family and pulled himself up by his bootstraps (or bicycle pedal straps). Duarte believes that the best bicycle racers come from such humble backgrounds.

Back in his day, Duarte recalls, "we drank panela and oatmeal," he recalls. "The strongest thing we took was Alka Seltzer."

Meanwhile, bicycles have also evolved into hi-tech, computer-equipped machines built around frames made of aluminum and sophisticated alloys. Asian, factory-made aluminum bikes have captured the popular market. The racing frames Duarte makes by hand out of steel and chromium-molybdenum tubing are sought only by those who love classics.

"These cost a million pesos," he says of his frames. In comparison, fat-tubed aluminum frames "cost 300,000 pesos." He motions again at his own elegant creations. "Nobody wants these."

"Those are common frames," he says. Except for himself, "Nobody makes fine frames."

Grudgingly, Duarte's family business has evolved with the times. His two sons who have pursued careers with bicycles repair aluminum and carbon fiber frames. As for himself, Duarte says he's about done with frame building. 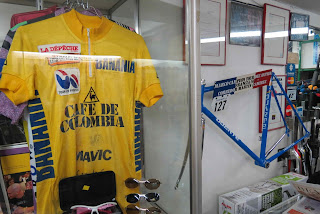 "I'm tired," he says, standing in his workshop beside a row of steel Duarte frames. "I don't want to make any more frames."

But his decision is not absolute. He will still build frames for friends, altho that will depend on the outcome of the spinal surgery he has scheduled for the coming weeks to repair several lower back vertebrae damaged from decades leaning over bicycles.

Duarte doesn't make hand-made steel tube frames to be fashionable or retro. He does it because they're all he knows and because he likes their slim, simple elegance. I left Duarte's shop with terribly mixed feelings - impressed with the man's skill and dedication, but sad about the twilight of an era of artesanal framebuilding.

"People have lost their love for these artesanal frames," laments Claudia Reyes, Duarte's daughter in law, who manages the bike shop. "Working on them isn't easy."

Thanks to the great Colombian bike racing blog Cycling Inquisition, where I first read about Jose Duarte.