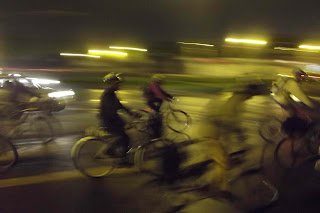 Every other Wednesday night Bogotanos are treated to a novel spectacle in a city normally clogged with cars: hundreds of cyclists pedaling by, filling streets and - wonder of wonders - obliging the motorized traffic to stop for them!

It's the bi-weekly Wednesday night ride, or Ciclopaseo, which has become an institution in Bogotá cycling, at least on the city's north end.

The rides make for a fun, social time with other cyclists, even if Bogotá's urban scenery isn't so spectacular, especially at night. But the rides demonstrate that cycling has a place and a fun one, in this big and chaotic city. 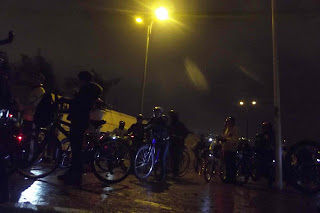 The Ciclopaseo has been going on for six years, and have attracted as many as 600 people, altho the typical number is 300, says Andres, the organizer and leader. Most of the participants are university students, many from the private Los Andes University, but middle aged people and a few children show up too, as well as the occasional pet dog. While university is in session the ride happens every other Wednesday, and every Wednesday during school breaks. 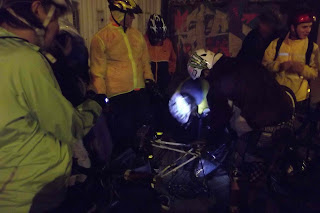 Routes take in avenues, parks and wetlands, mostly of north Bogotá. But Andres doesn't fear leading the group thru rough areas, such as the narrow alleys of the poor Belén neighborhood during this week's ride, which started in central Bogotá in honor of Bogotá's annual Bicycle Week. Some of the participants rode Specialized and other high-end bikes which, under normal circumstances, would likely experience a sudden change of ownership in some of these rough neighborhoods. But there's strength in numbers during the Ciclopaseo. The ride normally starts in the far north, perhaps because most Andes University students live at that end of town. For those of us who live in the center, however, that makes participation difficult, since it means returning home near midnight. 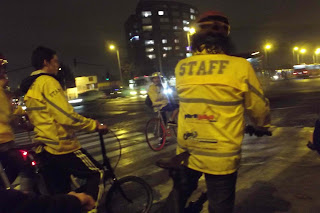 As the Ciclopaseo has grown in numbers of participants, it has also in sophistication and assertiveness. Uniformed support people carrying walkie talkies stop traffic while the crowd of cyclists pedal past - undoubtedly annoying drivers, but also making the point that two-wheeled traffic deserves respect on the road in a city in which motorists take for granted that they have priority all the time in all situations. On the other hand, it seems to me that the Ciclopaseo could find a better way to handle flats, which seemed to happen every few blocks during this ride, obliging the whole group to stop and wait for the patch job. Perhaps one of the support people could lend their bike to the person who flatted, repair the flat and then catch up, to keep the group moving. However, a participant I talked to said that tonight's number of flat tires was exceptional - perhaps because south Bogotá's streets are tougher on tubes, especially the fixies' thin tires - even tho this group was small than usual (probably because of the rain). 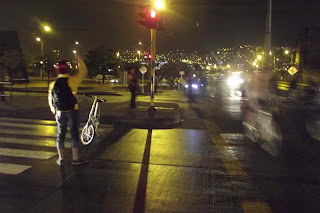 My more substantive criticism of the rides is its failure to incorporate bicycle activism. It'd be a great opportunity to collect signatures, recruit activists, etc. for cycling causes. Why not use the ride to rally at some establishment that lacks bicycle parking? How about documenting the sad state of a cycle lane, or pointing out a dangerous intersection?

But, activists or not, the cyclists do make an impression. On the gritty Ave. Decima people asked what was going on and stood in doorways to marvel at this unusual phenomenon. With time, hopefully, mass cycling will become a common sight in Bogotá. 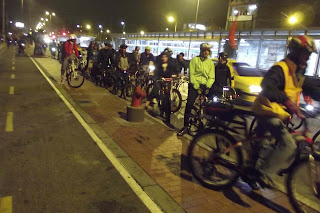