For the past year or so, thanks to delays in putting the new TransMilenio line on 26th St. into operation, the unused lanes have been a de-facto bike lane - Bogotá's widest, straightest and most uncluttered bike lane, in fact.

But with the planned (partial) opening of the new TM line tomorrow - only about two years late - this will end. The avenue will have a bike lane designed to be a bike lane. It's a good lane, but of course it is narrower, and also shifts from the sidewalk to the center of the avenue. 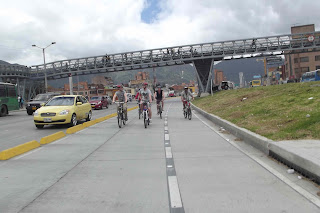