Car-Free Day is Not Bicycles Day

Today was Bogotá's annual Car-Free Day, intended to get auto-addicts to think about new ways to get around.

One of those ways is cycling. Disappointingly, however, I didn't see a whole lot more cyclists than usual. Here are photos of a few of them.

At the Universidad Central, the parking lot attendants told me that about 80 people had arrived by bike - some eight times the usual number. However, that was probably partly because the university organized a bike ride out to some wetlands. At the neighboring Universidad Jorge Tadeo, the parking lot attendants said that 23 cyclists had arrived - only a few more than 15 people who normally pedal to campus. And, they added, the number had plummeted from the more than 50 who pedaled to campus during last year's Car-Free Day. All of this despite the fact that the university sent out an e-mail reminding people that free bike parking was available. (Bicycles park free there every day, in fact.) 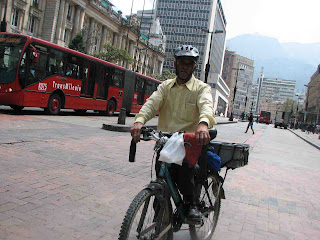 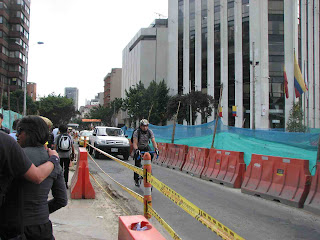 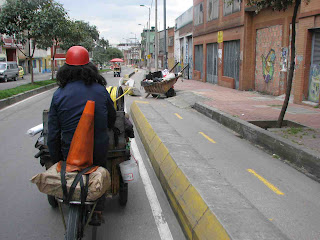