It's time for the National Congress of Bicycles, when everybody working in the industry - or at least the manufacturers and retailers - get together to - market more bicicletas! 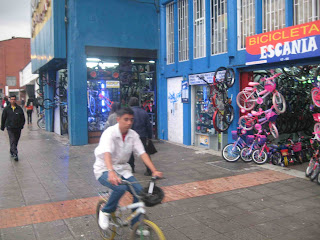 The bicycle industry appears to carry real economic weight in Bogota - go down Jimenez Ave. and you'll find the city's 'bicycle row' - many blocks crowded mostly with bike shops, and many businesses, including some big ones such as beer companies, use bikes or tricycles to do deliveries. Yet, bikes aren't very visible in advertising. Open the paper or turn on the TV, and it's all about cars, cars, cars (and tobacco and liquor).

However, the biggest failing of the industry, it seems to me, is the lack of notable efforts to promote a cycling culture. Related to this, I suspect, is Colombia's unequal distribution of wealth - a lot of people (over 40 %) are poor, and a small proportion are very, very rich. And Colombians are very class conscious!

Many low-income people ride bikes to work, or for work, just because it saves them money. But the bicycle industry takes them for granted. These people HAVE TO buy bikes. And, anyway, they use cheap or used bikes, which generate small profit margins, if any at all. Rather, it's the rich who buy the pricey, high-margin Treks, Cannondales and aluminum frame bikes. This is the expanding market and the one retailers chase after.

But these cyclists don't ride their bikes to work: Don't be silly! That makes you look like a poor person! These folks drive their cars to work and then load the bikes onto them on weekends for a pedal around the countryside.

So, what we really need here are more cars to load those bikes onto. 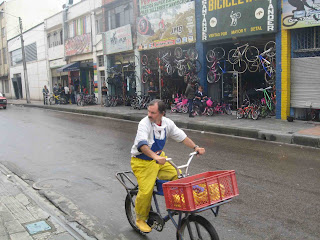 Call the bike industry's focus on selling short-term thinking. Perhaps someday Bogota could be like Portland, San Francisco or Amsterdam, with reams of yuppies pedaling to work on their Dahons. But that's a long way off. So, why bother to work toward it?

Looking at the Bicycle Congress's agenda, I see talks by economists, a bicycle race announcer, an expert in customer relations. I see nothing about transit or commuting - which is natural, if these bikes are never intended to touch an urban road.
Publicado por Ciclistas Bogota en 19:11