Bicycles Near the Seat of Power 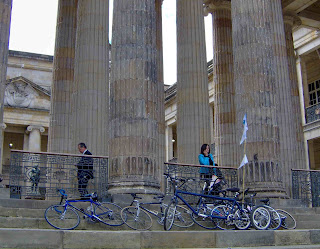 This group of bikes on the steps of Colombia's Congress invites reflection on why it is so seldom that bicycles and cyclists ever get near the seat of power, either physically or politically.

These bikes also illustrate something else - bicycles' healing power. They are being ridden by a group of soldiers injured by land mines placed by guerrilla groups - part of the tragedy of Colombia's destructive war. Many have lost legs or feet, but they can still use bicycles.

Tragically, bicycles have also been used as weapons in Colombia's war - there have been several cases of bicycle bombs.